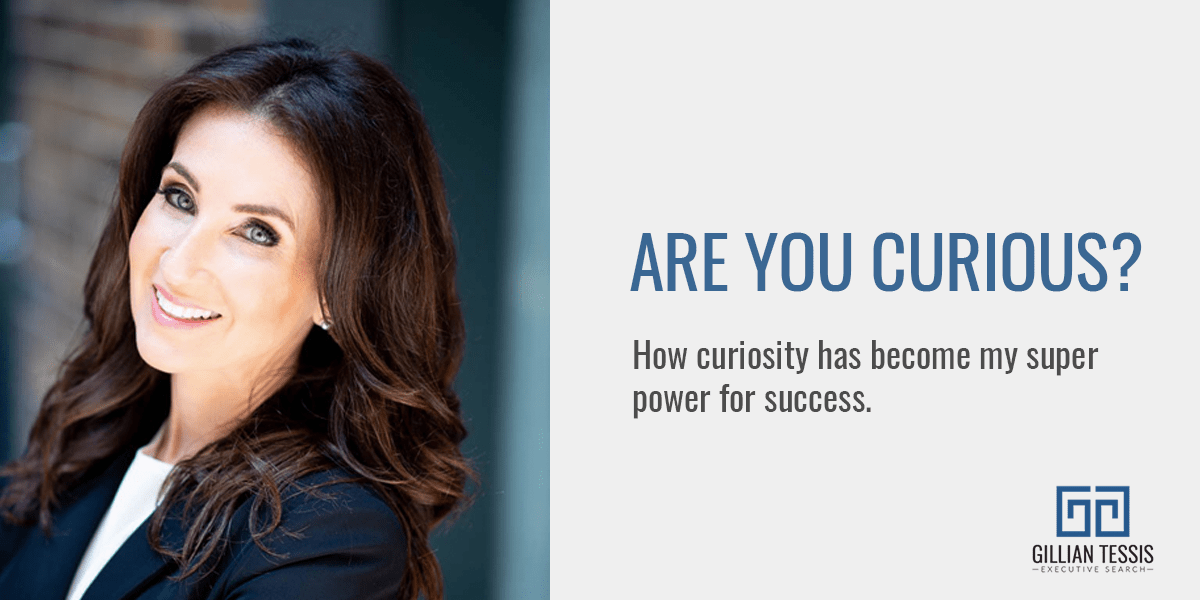 How curiosity has become my super power for success

Do you remember Curious George? That adorable monkey always managed to get into mischief due to his insatiable curiosity, yet the story always ended on a high note. In every book, George’s curious ways led to a positive outcome (and praise from the man in the yellow hat!).

When I was young, my mom used to call me “Curious Gill.” In fact, to this day she’ll occasionally refer to me as Curious Gill when she thinks I’m asking too many questions about something that she feels doesn’t warrant an inquisition.

Curiosity has been inherent in me for as long as I can remember. While some may see that as a negative, it really has become my “super power” in both work and life. My innate ability to dig deeper, ask questions and seek and learn more has been invaluable to me as an executive recruiter, an involved parent (though my teenage kids may argue too involved!) and a supportive friend.

I believe I inherited my natural curiosity from my father. He was a personal injury lawyer and always stressed the importance of ensuring he was clear on all the facts of his clients’ cases, regardless of whether the facts benefited or hindered his case. He would spend hours asking his clients to walk him through what had happened on the day of their accident.

Having practiced law for more than 40 years, my father had heard it all and was well-prepared for the angles his clients might have been taking to bolster their cases. As a result, he retained a fair amount of skepticism. If he felt a story didn’t add up, he would continue asking questions until he felt that the story was credible.

My father brought these courtroom skills home with him. At times it felt like my siblings and I were witnesses under cross-examination. When he asked us about our days, we were careful to share the information as accurately as possible. He was quick to pick up on any inconsistencies, which would mean starting from the beginning.

So at an early age, I learned the importance of knowing all the details and being prepared. My insatiable curiosity and desire to truly understand all the details is how I make sense of the world. It’s especially served me well in my role as an Executive Search Partner. Key parts of my role include gaining a deep understanding of each client’s hiring requirements then conducting a rigorous assessment of candidates to ensure that I deliver an outstanding shortlist for every search mandate.

I spend many hours at the outset of a search with the hiring manager or selection committee as well as key stakeholders (such as peers, direct reports, and/or other team members with whom this individual may interact) to gain a thorough understanding of the organization and culture, and the ideal candidate profile. This includes learning more about the role, key leadership styles and responsibilities, short-term and longer-term goals, and deliverables.

For example, prior to starting a search for the newly created role of Vice President Human Resources at a privately held Canadian manufacturing company, I spent half a day at the company’s headquarters. I met with nine executives in groups of three in order to gain a better understanding of what type of leader would best fit into the organization. This upfront due diligence was instrumental in leading to a successful hire. Moreover, I know my client was very appreciative of the time I spent getting to know their team which also deepened our relationship.

I pride myself on my rigorous assessment of candidates. My curiosity motivates me to learn details about candidates that my competitors may not consider as important. In addition to doing a deep dive in areas such as a candidate’s education, career progression and leadership experience, I also probe other areas including early interests, hobbies, sports, challenges, and part time jobs during school to obtain a more holistic view of the candidate. When I sense something is “off” or doesn’t add up, I don’t just let it go. Instead, I ask a series of follow-up questions to ensure I’m comfortable with the responses. It’s not unusual for my interviews to last longer than 90 minutes and I’ve had many candidates comment that they’ve never been through such a detailed interview.

Asking questions that may seem unimportant to others also helps me gather information for my internal database. Sometimes these details lead to a connection between seemingly unconnected people, and I’m able to make an introduction at a later date. This happened a few years ago when I led a CEO search for a non-profit organization.

During the kickoff meeting, I thought of the perfect candidate. This particular candidate wasn’t working at a company that would ever be on my client’s radar, nor did she hold a position that my client would have ever thought relevant. However, based on my previous discussions I knew her very early career history was in my client’s industry and, coupled with her more recent experience in business development, would make her uniquely qualified for the role. Had I not been curious about this individual’s very early career, I could have never made this connection.

The old saying goes that “curiosity killed the cat,” but in my world, it has truly become my super power. While my kids and husband might lament that I ask too many questions, I know I have found my calling as an Executive Search Partner. My career allows me to leverage my curiosity in a positive way that benefits my clients. They can take comfort knowing that I’ve asked candidates all the relevant questions and that I can provide them with the information they need in order to make the best hiring decisions.