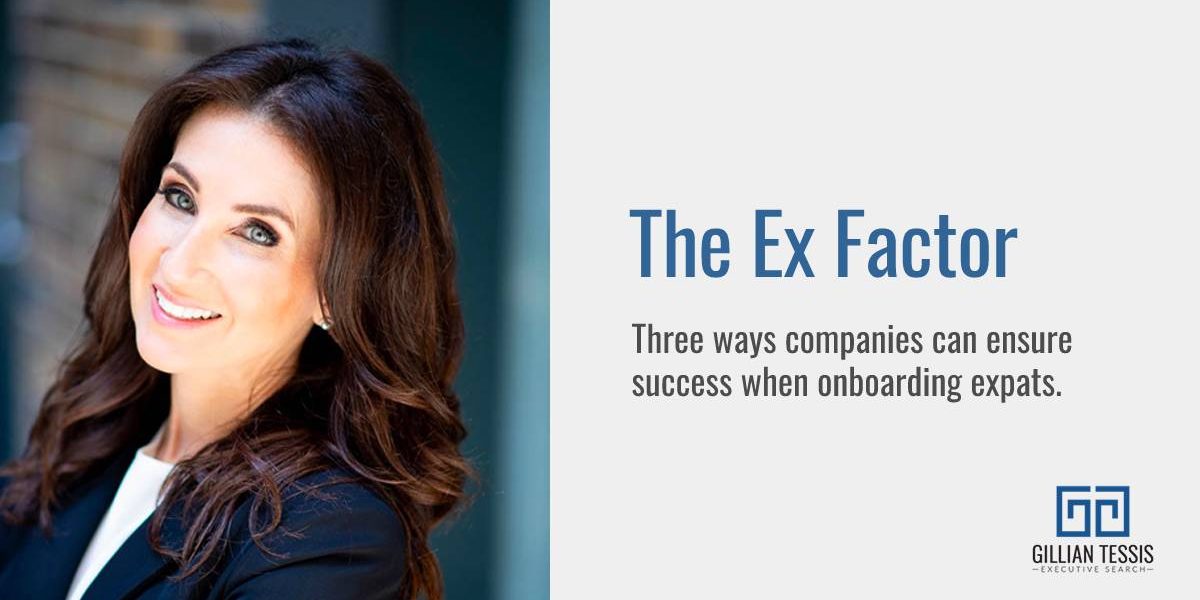 Running into an ex isn’t something I’d ordinarily celebrate, but these are no ordinary exes… I had the unique opportunity of interviewing three professionals about their experiences as expats.  We covered the rewards, the challenges, and the things that made all the difference in the transition for them personally and for their families.

Rory Moss is President of ROCKWOOL North America. He’s been with the company since 2007 and in that time has worked in their offices in North America and Europe. In 2014, Rory moved from Canada to the UK with his wife and daughters, and four years later the family moved to Denmark. In 2020, Rory was promoted to his current role and is now living in the United States.

On the flip side is the experience of moving from another country to Canada, which has its own unique challenges as well. I spoke with Nicola O’Donoghue, a Global Relocation Expert from the UK and former Oxford-educated corporate lawyer, who’s lived and worked on three continents. Having navigated the highs and lows of expat life firsthand, Nicola launched her own business coaching spouses and couples on how to take control of their experiences as expats and create a meaningful life abroad.

And finally, I spoke with a Senior Executive in the Consumer Goods Industry who has worked throughout Europe, South America and Asia before moving with his family to Canada. He spoke candidly about adapting to life in Canada.

The World is Their Oyster

These professionals, while varied in their industries, all possess similar traits commonly found in expats. Any individual who’s willing to pack up their life and move to a new country possesses a sense of adventure, an open mind, and isn’t afraid of a challenge.

Rory Moss fits this persona to a T. He’s lived all over the world, and believes it’s been hugely beneficial for his career, “Your eyes get opened and you get to live a different life. You learn how to shift your perspective; shift and adapt, and what you get is resilience, cross-cultural learning and acceptance, and that leads to creativity in business.”

The Senior Executive in Consumer Goods also believes that his life and career has benefited immensely from living and working all over the world. He brings a “truly global vision” to his new companies, as well as insights into many different cultures. Furthermore, his global experiences have made him “very open and flexible.” He’s happy to embrace change and he’s become more comfortable with managing risk.

A seasoned expat can also offer global connections and a wide network that the average employee may not have. Nicola O’Donoghue’s entire coaching business was built on her experience as the spouse of an expat, and the connections she formed moving from one country to the next. As she put it, “Being able to work within different cultures allows you to see things from an entirely new perspective. You become very resilient and much more adept at managing change whilst quickly forming new relationships .”

Working within different cultures cultivates leaders who see the world differently, and are more likely to promote a diverse work environment. This is exactly the kind of mindset companies need in 2021, as they strive to create diverse and inclusive teams.

The benefits of an expat lifestyle may be obvious (namely proximity to the French Riviera) but it’s not without its challenges too. All three professionals shared similar pain points from their experiences living abroad.

Family is everything (no matter the postal code) and all three professionals independently spoke to how crucial family is when adapting to a new environment. All three acknowledged that “A supportive spouse is key!”

Nicola went on to explain that over 50% of corporate relocations fail due to family members struggling to integrate within their new communities. Professional expats have the advantage of a new job (and the built-in connections that come with it) to bolster the excitement of moving somewhere new, but for children leaving the only friends and schools they’ve ever known, and spouses who might be sacrificing their own careers and social networks for a move, it’s a different story. “A move can put a ton of stress on a family. Every member is navigating change and dealing with a different experience.”

But just as the challenges are faced by all members of a family, so too were the rewards of an expat lifestyle. Rory beamed with pride as he spoke of how resilient and adaptive his daughters had become through living abroad.

When Rory and his family moved to Europe from Canada, they had to learn entirely new systems for everything (banking, housing, schooling, healthcare), knowledge they’d taken for granted while living in Canada. Throw a new language into the mix, as the Senior Executive who recently moved to Canada from Asia experienced, and it can feel particularly daunting. He spoke of the challenge of “starting from scratch,” and doing it all without a support network.

Navigating new systems can ultimately be broken down into learning the steps, but navigating a new culture is much more nuanced. When the Senior Executive Leader arrived in Canada, he had no appreciation for the Canadian “hockey culture” or the Canadian tradition of going up north to a cottage in the summer, just two examples of topics his Canadian colleagues and friends seemed to talk about a lot. While at first he felt he couldn’t add to these conversations, he has embraced these uniquely Canadian things. He now shares in the joy (and co-misery) of being a Toronto Maple Leafs fan and is excited to go to his first cottage this summer.

Rory encountered this both within and outside of the office. In North America, he was used to working long days and being available even when taking vacations, but in Denmark, his team had a greater appreciation for work/life balance and tended to not check email when on vacation.  It took Rory time to adapt to this new cultural norm, but respected their “work to live” approach, versus North America’s approach of “living to work.”

For the Senior Executive I spoke with, the most surprising difference between Asia and Canada was the value companies placed on their hierarchy. In Canada, leadership roles are much more important and the team relies more heavily on the CEO for their vision and strategy.

What Companies Can Do to Ensure Successful Relocations

When asked what companies could do to ease the transition of moving abroad and starting a new life in a foreign country, all three professionals shared similar thoughts.

A relocation coach is a hands-down must have for expats. These coaches should be made available as early in the process as possible and should assist with the big life decisions (is the family buying or renting a home, where should that be in the city, what schools are best for the family, will they need a car?) and what to expect when living in this city (explaining things like the typical cost of living and how the city operates). On top of practical decisions, a relocation coach should prepare an expat and their family for the cultural customs of their new home. One of the greatest lessons Nicola learned was to do more research about her new home before arriving, because it always felt like a culture shock. A good relocation coach will do their best to get to know the family, anticipate what aspects of their new home might be challenging to navigate, and provide the knowledge and support needed to ease the transition.

The experience of an expat’s family can make or break the relocation, so supporting their transition is crucial. A portion of the relocation budget should be dedicated to assisting family members. This can cover things like career coaching for spouses, educational consultants for children, coaching to prepare family members for the cultural changes, and relocation agencies to assist with the struggles of moving and setting up a new home.

Anything a company can do to help new employees and their families meet people is beneficial too. Nicola stressed how lonely it can be as the partner of an expat. She found some cultures to be very social and welcoming, but others were tough to break into. But either way, encouraging families to connect to expat communities and locals, either through the internet (in advance of their arrival), or in person through company gatherings can be a great way to foster new friendships.

Lastly, Rory believed a great way a company can show their support to expats and their families is through allowing regular travel home, by providing additional time off and flights. Those visits home to see family and friends can make all the difference for a homesick expat.

If you thought dealing with taxes was a pain, try paying them as an expat. Being a citizen of one country and living and working in another, and potentially paying taxes in both is a guaranteed headache. Rory and the Senior Executive file taxes in multiple countries and continents! Like the Senior Executive I spoke with, Rory stressed the need for professional support when it comes to tax season, and this is something companies can easily assist with after an employee has relocated.

Finding the right expat for your company is only the first step (and that’s what I’m here for) but ensuring their success and longevity takes a bit more forethought and planning on the part of the company. With increased support for establishing a new home and adapting to a new culture, investing in the happiness of the entire family, and providing a little extra help come tax season, you can create a smoother relocation experience for your new hires.

If you’d like to learn more please feel free to connect with me at gillian@gilliantessis.com